Back to all posts

Off to a fun start this so-called "Dry January". Yesterday was a rather big delivery day for our small winery and today this article published by the SF Chronicle about our beloved Sauvignon Blanc!

The new 2022 will release in a couple of months. PUMPED!

Also, here's a post from last March on our Sauvignon Blanc focus over the years.

Chardonnay’s longtime reign as California’s sovereign of white wine is in jeopardy. Sauvignon Blanc has emerged as one of the fastest growing wine varietals in the U.S., suggesting that wine drinkers’ preferences are shifting away from rich, medium-bodied and oaky whites to crisp, light and zestier offerings.

In 2022, Sauvignon Blanc is the only non-sparkling wine varietal that experienced positive growth at 1.5%, according to Silicon Valley Bank’s 2023 State of the U.S. Wine Industry report, an annual analysis of the industry’s growth and challenges based on a winery survey and data. By comparison, seven wine varietals experienced positive growth in 2020; Sauvignon Blanc grew 9.5% that year.

In California, the fresh and citrusy Bordeaux grape variety has long lurked in the shadow of Chardonnay, which owns the largest share — roughly 15% — of the U.S. market for wines sold to retailers, according to distributor data analyst SipSource. At 6% market share, Sauvignon Blanc is unlikely to catch up with Chardonnay anytime soon, but California wineries are already struggling to keep pace with the grape’s burgeoning demand. And rising fruit prices and short supply are compounding the issue.

Healdsburg’s Smith Story Wine Cellars only produced 600 cases of Sauvignon Blanc in 2022, so the winery is carefully dividing the inventory between wine club members, the tasting room, retail and restaurants. Co-owner Alison Smith-Story said she’s even considering a pre-sale of the wine to help plan ahead for wholesale and mailing list orders, something Smith Story has never done before. “It’s probably our number one wine that people ask about when walking in the door,” she said. “Last year we had to decline wholesale orders because we didn’t have enough. It was the first time in my career.”

In the last year, Stephanie Honig, co-owner of Napa Valley’s Honig Vineyards & Winery, said Sauvignon Blanc was so popular, restaurants and stores were sold out for four months. While the winery typically releases the wine in March or April, the 2022 vintage went straight to distributors after bottling in November to re-up supply.

It’s a stark contrast to when the winery first began making Sauvignon Blanc in the 1980s — “before anyone could sell it,” said Honig. Her husband, Michael Honig, “had to convince people why they should have Sauvignon Blanc on the wine list.”

Even famed Napa Valley pioneer Robert Mondavi had a hard time moving Sauvignon Blanc in the 1960s, a time of particularly low public perception of the wine. His solution: rebrand it. Mondavi named it Fumé Blanc, a play on the classic and well-respected Pouilly-Fumé, a style of Sauvignon Blanc produced in France’s Loire Valley. Mondavi Sauvignon Blancs are still labeled Fumé Blanc, and reserve styles sell for $95 and above.

California’s true Sauvignon Blanc revolution took place over the last 20 years alongside the “Anything but Chardonnay” movement, which came out of a deluge of Chardonnay production. Many wineries started to experiment with Sauvignon Blanc and release pricier, high-end bottlings that gave the grape some much-needed clout among serious wine drinkers. Cult Cabernet brand Screaming Eagle makes a small amount, for example, which sells for north of $1,000.

“Sauvignon Blanc has that kind of racy character and yet really good acidity and beautiful balance,” said Spottswoode Winery owner Beth Novak Milliken. Spottswoode was one of the first Napa estates to produce the wine in 1984. “It pairs beautifully with food, and if well made, they’re compelling, complex wines.”

Inspired by classic French styles, like Pouilly-Fumé and Sancerre, these sophisticated Sauvignon Blancs are often partially fermented and aged in oak barrels or concrete — as opposed to stainless steel — for added roundness and complexity that enables the wines to age for years. Many producers also follow the French tradition of blending a small amount of Sémillon into the wine, known to add structure and mouthfeel.

The wine’s newfound popularity has even earned it a nickname — Sauvy B — which has caught on with younger drinkers. The first time Smith-Story heard a 20-something ask for Sauvy B at the tasting room, she said she didn’t know what they were talking about. But she has found that Generation Z consumers seem “worn out” by the oaky profile of many Chardonnays. “They’re looking for and enjoying a brighter, lighter style of wine,” she said.

Sauvignon Blanc could help unlock the potential of younger consumers, one of the industry’s greatest modern day challenges. But grape prices are on the rise, which could drive the price point of Sauvignon Blanc out of reach for Millennials and Generation Z. According to the 2021 California Grape Crush report, the cost of Sauvignon Blanc per ton rose 7.8% from 2020. John Conover, managing partner of the Gavin Newsom co-founded PlumpJack Group, estimated that Napa County Sauvignon Blanc prices have risen 20% in the last three years.

This is unlikely to change in the near future, especially in Napa. The dominance of Cabernet Sauvignon has driven Napa Valley growers to rip out Sauvignon Blanc vines (and others) and replant the region’s prized grape over the past two decades; Cabernet commands higher prices for growers, while farming costs are similar. The California drought has also impacted yields in recent years, further shortening supply. Massican Winery owner Dan Petroski, who is paying as much as $4,000 a ton for Sauvignon Blanc in Napa — up from $2,800 five years ago — said he recently received no fruit from a vineyard that typically produces 10 tons from the two acres he’s contracted for.

This combination of limited supply and rising prices are pushing many Napa wineries to look for fruit in other regions, though it means sacrificing the prestigious “Napa Valley” stamp on the label. (A winery can only legally showcase an official appellation, like Napa Valley, on its label if 85% of the fruit used comes from that region.) Honig found fruit of similar quality and profile in Lake County — where in 2021, the winery paid $1,200 per ton compared to $2,600 in Napa — and now produces a Sauvignon Blanc blend of the two regions.

Similarly, PlumpJack was considering making a Napa-Sonoma blend until the company stumbled upon a vineyard in Napa’s remote Eastern hills, purchasing the 129-acre Oso Vineyard in Pope Valley last year. It will provide a stable source of Sauvignon Blanc moving forward, said Conover.

Wineries that don’t have their own Sauvignon Blanc supply will have to battle for their share in the coming vintages. But Milliken believes this will ultimately be better for the category as a whole.

“Higher grape prices means more people will plant it — and plant it in better soils because they know they’ll get a return for it,” she said. “It’s a good thing.” 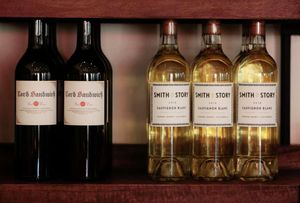